The June happy hour is next Friday (6/4/2010) in the Capital Brewery Bier Garten in Middleton (7734 Terrace Avenue, right off of Parmenter in downtown Middleton.)  In case of rain, we will meet at Quaker Steak and Lube in Middleton (2259 Deming Way, across the beltline off of University Ave/ Highway 14).

They have no food, so BYO, or perhaps there will be a movement to order pizza from one of the local pizza companies.  If you have a plastic Capital Brewery mug from a previous event, bring it for a discount on your beer!

Steve will be there at 5:30 to greet everybody!

Board and Membership Meetings the Week of 5/24

There's a board meeting on Monday, May 24th, 2010, 6:30PM at Vintage Brewing Company (674 S Whitney Way in Madison -- formerly JT Whitney's), we'll be mainly discussing proposed reworking of the bylaws. The location may change, so watch this space and the calendar to be sure.

Updated to add (5/24): There will be a board meeting at 6:30PM preceding the membership meeting.

All members and prospective members are welcome!

Wisconsin will be trop rockin' in June! Capped off with Jimmy Buffett on June 26th at Alpine Valley:

The second week of June in nearby (for various definitions of nearby), Rochester, MN, Brent Burns plays on Thursday, June 17th at Thursdays on First and Third and Trop rockin' Rochester at Kahler Grand Hotel is hosting Brent Burns and Jim Hoehn on Friday, June 18th and Saturday, June 19th.

The first week of July finds Scott Kirby at Giovanni's in Rockford, IL on July 2nd, Key Wester in Naperville, IL on July 3rd and at Sky View Lodge in Presque Isle, WI on July 5th.

(Still looking for tickets to Alpine? Give Live Nation a try -- as of this writing there are a number of single seats available in the pavillion.)

The May Happy Hour is next Friday (5/14) at Cheeseburger In Paradise in Greenway Station in Middleton (Greenway Blvd at Demming Way).

Some PHIP History and the return of the Silver Chalice

Taken from the January-March 2010 Tradewind Times

On April 1, 1989 approximately 15 Parrot Heads met at Chastain Park (the site of many previous Buffett concerts in Atlanta) for the first official Parrot Head Club meeting, then headed to a local patio bar for margaritas.

By the end of 1992, clubs had emerged in Beaumont, Dallas, New York City, Orlando , Detroit, and New Orleans. The First Annual Parrot Head Convention, or "Meeting of the Minds" as it is fondly referred to, was organized by Jerry Diaz of the Beaumont club to take place in New Orleans, Louisiana , home of the newest Margaritaville Store & Cafe, in late December 1992.

Approximately 80 people attended and all had a fantastic time. After all expenses were deducted from the collected registration fees, $200 was left over and donated to New Orleans Artists Against Hunger & Homelessness. The clubs also "honored" Jimmy Buffett with the "Silver Chalice" lifetime achievement award, which can still be seen high over the register at the Margaritaville store.

In an effort to recognize and pay tribute to some of the people who’ve made significant contributions to the "ParrotHead Nation" over the years and helped craft this organization into what it has become today, the PHiP Board has voted to resurrect the Silver Chalice Lifetime Achievement Award as an annual presentation at Meeting of the Minds.

The award will be presented annually with nominations coming from the general PHiP chapter membership. Further details, including qualification criteria and nomination process will be forthcoming.

Belatedly, the thank you note from Bethel Lutheran Church Food Pantry for our $1,250 donation. 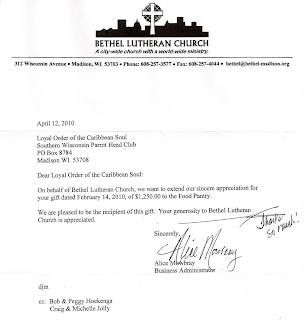 It should be noted... The belated refers to me (jon) getting it on the website, not Bethel Lutheran, they got us the thank you promptly.

In the face of the shifting sands of the pandemic and life, it's hard to keep this site as up to date as we would wish... But, you'r...